Just another bunch of big kids

The only thing left is the frame 1

Back in 2013 when I decided I was going to do LeJog I bought myself a bike.  That bike was the Kona Dewdrop – a rather splendid bike that suited my style of riding.  Essentially I will cycle on everything from road to canal path to dirt track.   The Dewdrop is a hybrid bike with drop handlebars, Avid BB7 brakes and was bought 12 months old off ebay for £300.  The guy I bought it off had fitted carbon forks to get rid of the harsh ride that others have complained about.  In the 18 months of owning it,  it’s stood up pretty well to everything I’ve thrown at it, even a metal post!

Since owning it, I’ve slowly replaced bits to make it my own.   After hitting a metal post in December 2014 and sliding off whilst cycling on ice the other week, I was concerned that I may have bent the frame.  After taking it to my LBS (Red Kite Cycles) they reassured me that all was good and that the frame was straight.   What wasn’t straight was the pedal, the left crank, the handelbars, the left brake/shifter and bottom bracket.  The forks may need replacing as they don’t make a uniform noise when you tap them on the left hand side.

So now I’m busy replacing parts.  The new bits going on the bike are:

So I can see that possibly before 2015, I may end up replacing pretty much everything on the Kona Dewdrop.  In fact with the forks in need of replacement, I’m considering this…. 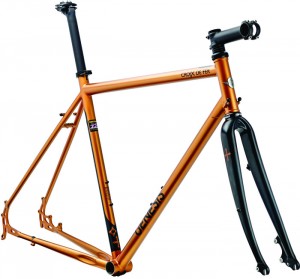 The Genesis Crois de Fer frameset.    The hybrid has been good, but I’m eeking more towards a CX now.  This frame looks the business too.   Watch this space for further developments!

One comment on “The only thing left is the frame”